As a result, the founder of SKIMS adjusted her social media accounts accordingly in the evening of Thursday, March 3.

Although her last name, “West”, has been scrubbed from her Twitter and Instagram accounts, the Keeping Up with the Kardashians star continues to promote her KKW Fragrance brand that bears her marriage initials.

During the hearing on March 2, the court also accepted her plea to be legally single.

Kim joined the court hearing via a video call as her lawyer, Laura Wasser, was in court. Kanye was absent.

Even though Kanye’s lawyer, Samantha Spector, did not object to restoring Kim’s single status, he said the rapper had 3 conditions.

The first was that, any right to get reimbursement of money that’s supposed to be divided up will be preserved in case either of them dies. The judge granted that condition.

The judge threw out the two other conditions. They included; Kim would not transfer any assets she had in trust and if she remarries, she would waive the “marital privilege”. That privilege means a new spouse would not have to testify about communications he had with her.

Kim made the request to be legally single in December 2021 but Kanye West opposed it in court.

As her plea has been approved by the court, her quest to become a single woman has become a reality. As such, from now onwards, Kim will be known just as Kim Kardashian – the West is gone.

The court divided the ongoing divorce proceedings into two parts.

The first part, which focused on settling her legal name and marital status, has been concluded.

The next and final part will concentrate on the custody over their children and financial assets.

To close out the hearing on Wednesday, Kim answered a series of questions, known as the “prove up” which included; “Are there problems in your relationship?” and “Do you think your marriage can be saved with counseling?”

Kim answered “yes” to the first and “no” to the other.

Kanye’s lawyer said in a statement that he is focusing his “entire attention” on their four children: North West, 8, Saint West, 6, Chicago West, 4 and Psalm West, 2.

Regardless of the divorce proceedings, the rapper and producer has been publicly fighting the separation and has appealed for Kim to return to their marriage.

On Valentine’s Day this year, he sent a truckload of roses to Kim. The truck displayed the words ‘My vision is Krystal klear’.

Kanye has also dropped a controversial video for his single, “Easy,” which took a swipe at Pete Davidson, the current boyfriend of Kim Kardashian.

One particular fan celebrated a little too much by stepping toward Vieira and goading the Frenchman which was not taken lightly.

The Arsenal legend then appeared to be shown turning around and reacting to the provocation and aiming a kick in the direction of the supporter.

Footage shown on Sky Sports News showed a fan appearing to goad Vieira as he made his way across the pitch and back to the dressing rooms.

The incident cast an ugly shadow on what was an otherwise special night for Everton after escaping relegation in such fairytale fashion only for the game to be remembered mostly for fan violence.

Viera declined to comment on the incident but expressed his disappointment in his team’s capitulation as Crystal Palace threw away a 2-0 lead.

“Disappointed as in the first half we played some really good football and controlled the tempo of the game and tactically. We came into the second half with confidence but did not respect the game as much as in the first half. Slowly they started to get into the game. The first goal woke up the crowd and it became difficult for us. The game went into a fight and we could not cope with it,” Vieira told Sky Sports. 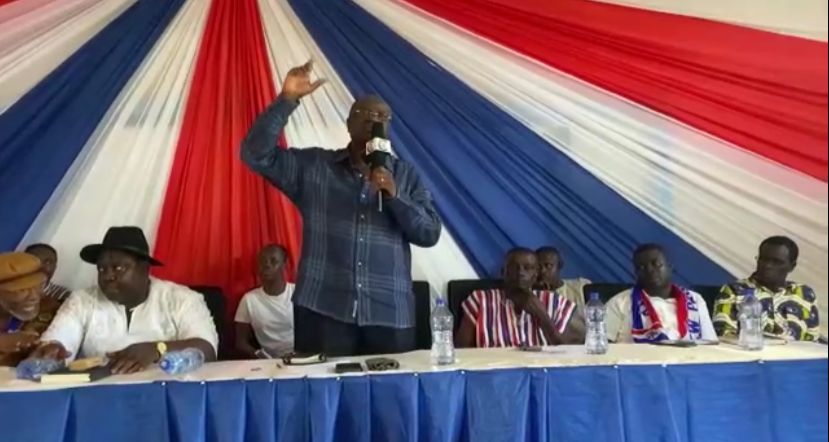 He said this when he addressed NPP party members. Mr. Ampratwum-Sarpong indicated breaking the 8 mantra will not be an easy task.

“I am on the ground, I know what is going on and hear what my constituents are saying and I know what they are saying out there in Accra, the middle class, lower class you name it. Today I’m talking about today’s matter. Today we have an uphill task, a big task,” the Deputy Foreign Affairs Minister disclosed.

Vice President Mahamudu Bawumia has told supporters of the New Patriotic Party last year in Kumasi at its National Delegates Conference that ‘breaking the 8’ will be difficult but a possibility if they work together.

Meanwhile, the National Council of the NPP announced guidelines for Polling Station, Constituency, Regional and National Executive elections for this year.

The NPP General Secretary, John Boadu, made the announcement at a press conference at the party’s headquarters in Accra in January. He said all the elections would be held from February 19 2022 to July 16, 2022, with the National Executive elections and the National Annual Delegates Conference slated for July 14 -16, 2022.

Rihanna has given birth and details drop online

However, for about ten days now, Rihanna has not been seen in public and according to reports, it is because she has delivered a baby.

According to TMZ, the 34-year-old singer welcomed her child on the 13th of May 2022 but has remained silent about it. “sources with direct knowledge tell us he was born on May 13 in Los Angeles ” the website said.

The celebrity news channel also disclosed that Rihanna has given birth to a boy. However, the name of the child is yet to be known. Rihanna on the hand is yet to comment publicly about her delivery reports.

According to GQ reporter, Samuel Hine, who interviewed the rapper for the magazine’s June/July cover, soon as he brought Rihanna up, in his conversation with A$ap Rocky, he ‘started beaming like a teenager whose crush just accepted his prom invite’ and said “the love of my life,” calling her “my lady“.

Asked what What’s it like to be in a relationship, the ‘Praise The Lord’ rapper said “so much better,” and emphasized that “so much better when you got the One. She amounts to probably, like, a million of the other ones“.

Speaking about marriage and if he is he’s comfortable embracing monogamy, he said “I think when you know, you know. She’s the One,” a comment which has sent the crazy about his relationship with the ‘We Found Love’ singer.

As Australia votes, cost of living a key concern | Business and Economy