A downpour in the Ho Municipality on Wednesday brought down giant billboards, ripped off buildings and uprooted trees in parts of the Volta Regional Capital.

The rainstorm, which lasted for some 45 minutes, caused severe destruction to some structures within the municipality.

Some schoolchildren in the Ho Municipality had to endure the pain of learning under trees on Thursday after the roofs of their classroom blocks were ripped off following a severe downpour on Wednesday evening.

An eatery, close to the Ho Municipal Hospital, was one of the affected places. 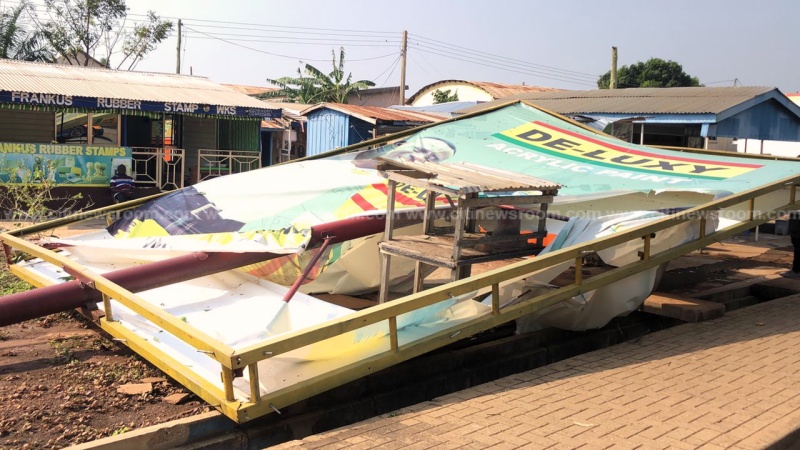 Three persons who were at the eatery during the rainstorm were injured after a mango tree fell on the eatery’s roof.

The injured persons are currently receiving treatment at the Municipal Hospital in Ho.

Some houses at Bankoe, a suburb of Ho, also had parts of their roofs ripped.

Several school children in the Municipality on Thursday had to study under trees as the roofings of their classroom blocks were ripped off following the rainstorm. 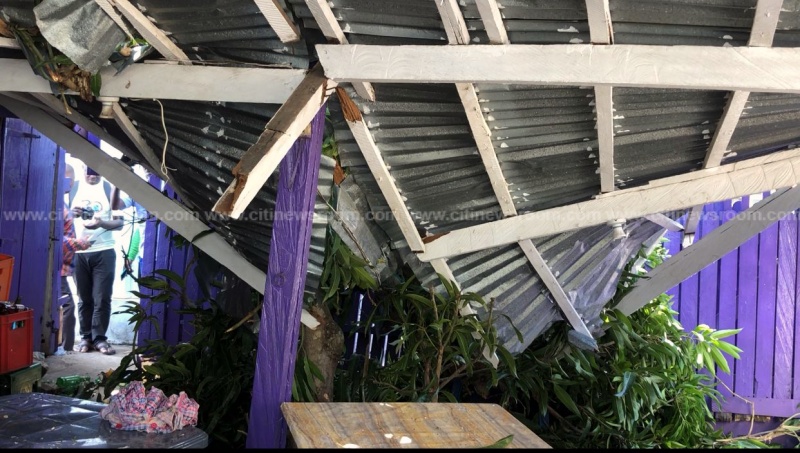 Some headteachers of some of the affected schools who spoke to the media say, the downpour “ripped off our roofing’s and today, we have to bring the class under the tree”.

At the Presby Basic School in Ho, the mead mistress of the school, Madam Vivian Coffie said, “Basics 1,3, and 6 have been affected, so currently, the children are being taught under trees and the rains have just started.

Madam Vivian Coffie added that, “with the rains setting in, and our children learning under trees, classes will shut if our classes are not roofed immediately”.

The MCE for the Ho Municipality, Mr Divine Borson says, checks will be made on the legality of erecting such billboards along the roadside.

“Billboards need a permit, just as any building. Business billboards are to be renewed after some time so we will check if these billboards still have permit to be erected. A lot of such issues are in town and some of these billboards impede road users from seeing ahead, especially at night due to their height”, Hon Divine Borson said.

Addressing the media after touring the affected areas, Mr Divine Borson says, the assembly and NADMO are working together to provide roofing materials to the affected houses and schools.

“We are on a fact-finding mission to see the degree of damage caused by the rainstorm. People have been displaced, schools had their roofs ripped, businesses have been affected and this has been the first of its kind to happen at the Ho Municipality.”

“We are taken unaware as we are not prepared for this. But as problem solvers, we must do everything possible to solve every problem that came with this happening as a result of the rainstorm. We are working to now provide roofing sheets to these affected schools and homes, so they can go back to their daily activities smoothly”.

He further appealed to benevolent institutions to come together and provide a lasting solution to the affected persons.

“We are appealing to well-wishers home and abroad to come to the aid of these people, to come together and join hands with the Assembly to help provide relief items to these affected people, especially the schools and homes. We need their help as government can not do it alone”.

The culture, politics and the economy so far [Article]

Majority of US weapons promised to Ukraine in February delivered

Self-made music producer and industry gatekeeper, Ayisha Modi has replied critics who attacked her yesterday for going under the knife to get a new hourglass shape.

Earlier yesterday, Ayisha Modi shared a video of herself seductively dancing to show off her new beautiful shape.

After the video went viral on the local digital space, some critics went under her post to bash her for learning negatively from Moesha and co.

They also slammed her for behaving like a slay queen although she’s very matured but has refused to act her age.

Ayisha Modi has come out to reply the critics who made a mockery of her under her own video.

According to her, her new shape is very natural and not artificial as claimed by her bitter attackers.

She additionally revealed that she used to be very fat and because of that she lacked self-confidence but after following the instructions from doctors and other professionals, she has now become slim and sexy.

Ayisha Modi’s transformation happened within twinkling reason most Ghanaians have the notion that she went under the knife therefore her shape isn’t natural.

Man proposes to girlfriend at her father’s burial

A South African pastor has received serious backlash after he decided to propose marriage to his girlfriend at her father’s funeral.

In a video that has been widely circulated, the man was seen kneeling in front of his girlfriend with a ring while she cried uncontrollably.

Family and friends who were standing by the coffin watched in dismay while the Pastor poured out his heart to his grieving girlfriend.

The lady who was mourning her father accepted the ring amidst claps from the mourners present.

Watch the video below;

This video has received mixed reactions from social media users who described the Pastor’s act as insensitive and manipulative.

Read some comments below;

Lucas Moagi wrote; “Why propose when she is at her weakest and vulnerable? It’s insensitive and just damn selfish of him”.

Musa_1 added; “Attention will be the end of us one day”.

ThatoDO1 stated; “This is by far the most unhinged marriage proposal I have ever seen. Not only is this man fighting to be the main character at someone else’s funeral, he is also taking advantage of a grieving woman who’s in no position to think this through, and putting her under pressure. Sick!”.

Skugonza 5 commented; “This is so inconsiderate and weird. So that her engagement day will be this big reminder that she also lost a loved one???? Was this man dizzy?”.

Gozielum added; “This guy is taking advantage of her vulnerability seems he is interested in the girls inheritance. This is so disrespectful. I will hit your head if you come close to me. Selfish man”.

Miranda_M indicated; “Also this is extremely manipulative considering how vulnerable this woman is and would do anything to feel an ounce of happiness”.

A 23-year-old butcher has been apprehended by the police for allegedly murdering his colleague over an earpiece at Kaneshie, Accra.

The suspect identified as Baba Ibrahim was reported to have stabbed 25-year-old Alhassan Zakari with a broken bottle.

According to reports, Baba Ibrahim got into a scuffle with Alhassan over earpiece and stabbed him with a broken bottle in the process.

ACP Edward Faakye-Kumi disclosed that Baba Ibrahim, who had a broken bottle in his hand, was escorted to the police station by a group of men with a swollen face and bruises on his arms.

The young men explained how the two butchers got into the scuffle and the victim was rushed to the Korle Bu Teaching hospital as he sustained serious injuries.

ACP Faakye-Kumi indicated that the victim was confirmed dead when a police detective went to the hospital.

The doctors revealed that Alhassan Zakari died while he was receiving treatment and his body has been deposited at the hospital’s morgue.

The suspect is currently in police custody after he was also discharged from the Kaneshie Polyclinic where he was treated for his bruises to aid in investigations.

Rise up against the e-levy – John Dumelo charges Ghanaian celebrities